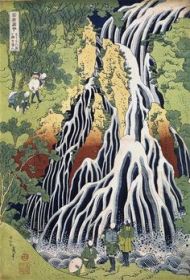 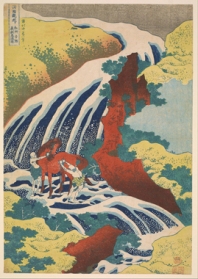 Hokusai, Old View of the Eight-part Bridge at Yatsuhashi in Mikawa Province, 1834

Last week I visited the exhibition of Hokusai (1760-1849), Hiroshige and Utamaro in Palazzo Reale in Milan. It is not by accident that Hokusai is the most famous of the three artists. The work of Hokusai is of the highest quality, because he used the technique of woodblock print (ukiyo-e) in a creative, modern and often also in a conceptual way. Hokusai used other subjects for his works, moving away from the images of courtesans and actors that were the traditional subjects of ukiyo-e prints. Instead, his work focused on landscapes and images of the daily life of Japanese people. The makers or curators of the exhibition have obviously chosen for quantity instead of (only) quality, by choosing to present the work of Hokusai together with the two other Japanese artists of his time. The educational aspect, they possibly had in mind, to combine contemporaries has failed.

A tour of the Waterfalls of the Provinces

The centrepieces of great quality are three series of woodblock prints by Hokusai, where he researches perspective and at the same time flatness (every print in a different way), while the subject matter from one series stays the same. These are the series A tour of the Waterfalls of the Provinces (1827-30), in this series the artist expresses his Shintoist beliefs. In the Japanese Shintoist religion, gods and spirits inhibit surrounding nature, such as trees, rocks, waterfalls and animals.

Unusual views of Celebrated Bridges in the Provinces

The second series is named Unusual Views of Celebrated Bridges in the Provinces (1827-30). In this series it is interesting to see that an object with an obvious perspective stretches from one side to another, in an often relatively flat designed landscape. The landscape has a decorative quality, while the bridge displays something else, namely perspective. This opposites are very interesting, also on a conceptual level. Modern artist like Van Gogh, Manet, Monet, Degas, Gauguin and Renoir have in particular learned from Hokusai’s decorative use of space. They were interested in Hokusai’s display of flatness, or in other words the display of plane against plane.

The third series and most famous one is Thirty-six views of Mount Fuji (1823-29), which contains by far the most familiar work The great wave of Kanagawa (1820’s). Here Hokusai researches (literally) different perspectives on the Mount Fuji (which stands for eternal life in the Nichiren Buddhist religion). Sometimes the mountain is small and takes a place in the background of the composition and sometimes the mountain is situated more on the foreground. In the most famous work the central subject is not Mount Fuji, but “the Wave”. Hokusai plays literally with perspective, but gives us also different views on the importance of the main subject in the composition. Hokusai builds a bridge between perspective and flatness, and between foreground and background. Through the work of Hokusai we see more; our perspective enlarges.