Today I saw a few advertisements for exhibitions in Palazzo Reale on the streets of Milan. You can find advertisements everywhere on posters of big sizes and also on the normally yellow trams, but now also on an e-bike. The context of the painting changes extremely, by the choice for a bicycle wheel. The painting becomes round and the figure rotates during a drive, like a figure in the sequences of Eadweard Muybridge or the rotating images of the beginning of cinema (Phenakistoscope). 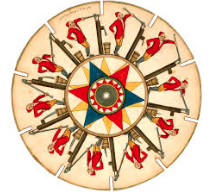 Faulty animation from an 1833 McLean’s Optical Illusions, or, Magic Panorama disc (slits never revolve when viewed through a phénakistoscope)

This is a small part of the result of what you get when you give in ‘The Fifer Manet’ at Google search, an endless repetition of the same image, without the painterly details of the original

Manet’s painting of a young troubadour titled The Fifer (1866) becomes here a figure out of a comic(film). The manner, in which Manet has painted, is not important anymore; it’s only an advertisement with the intention to get your attention quickly on the street. The advertisement for the exhibition of Kandinsky is more traditional in form (although a little bit wrinkled by weather influences). The capital K reminds of how articles or stories in newspapers initiating, but has nothing to do with Kandinsky the artist or his artistic career. The image is smaller than the text part. The K draws the most attention and not the image by itself. It’s the artistic freedom of the designer of the advertisement. In the end it is true that Kandinsky was an expressionist painter with a capital K, but his paintings by itself form the capital and the most important gesture, not the first letter of his (every time different spelled) name.