A few weeks ago I made a tour with a good (artist) friend along some art galleries in Milan. There was some great work on show, for example that of Clara Brörmann (1982) in the exhibition ‘Horizonte’ at the Federica Schiavo Gallery. The work is clearly painterly, layered and colourful. She asks the question if painting is able to bear a special experience, like looking to the sea (she describes a three dimensional experience). Unfortunately this show is expired now. 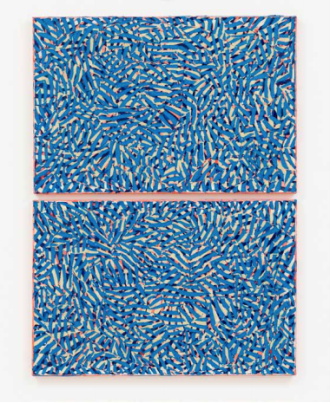 What caught also my eye was the work of Franco Vaccari (1936), an artist of a different generation and he created also totally different work. His work speaks the language of the conceptual art movement of the 1970’s. His main fame came with his contribution to the Venice Biennial of 1972. Although I must admit that I didn’t knew his work before, his work seemed familiar to me. I asked myself the question why. I thought immediately of books of the 1960’s and 1970’s, for example the book published by the exhibition Sonsbeek buiten de Perken (Sonsbeek out of boundaries) in the Netherlands (1971). In this book, international artist of the time presented their work made on a selected location somewhere in the Netherlands. The artwork, photographs and drawings presented in this book are typical for the aesthetics of conceptual art and land art of the 1970’s. Franco Vaccari also uses different media, from photographs, to reproductions, from texts to drawings. His work reminds me also of the conceptual work of Kosuth, Jan Dibbets and Ger van Elk. This is because of his ideas about and use of different media, the repetition of photographic images and the combinations of text and image. It’s interesting to see that the artist of the 1970’s sometimes are coherent in their used imagery and manner of working. In this time there is no such coherence any more between different artists out of different countries. In the modernist tradition, everyone wants to be original. Their aren’t unfortunately artist movements like conceptual art any more, but luckily painting is coming back very strong these days. 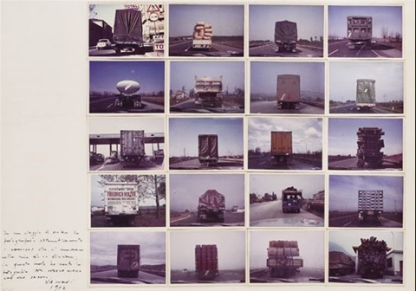 works by Franco Vaccari, with “dust” photograph of the Large Glass by Marcel Duchamp

“One of the fundamental differences between a painting and a photograph is that the latter contains more involuntary information, parasitic information, niches of mystery where the relationship between the elements is largely unknown, structured without our knowledge by the very medium we use; it is for this reason that we can speak of the ‘technological unconscious’.”

until the 14th of April